Call us
Home / Blog / Crete: More than just an island… an entire world of sites and attractions!

Crete: More than just an island… an entire world of sites and attractions!

Greece’s largest island is also known as “Megalónisos”, and indeed it is almost a country unto itself. Noted as the cradle of Minoan civilization during the second millennium BC, Crete has since then retained its unique charm and fiercely independent attitude. Crete is huge, both in area and in places of interest for the traveler, attracting repeat visitors every year.

The variety of things to do in Lasithi, Crete’s easternmost prefecture, and places to see is quite incredible. Archaeological sites abound while gorges tear through the predominantly limestone hinterland, affording visitors the opportunity to escape the more beaten track and become one with nature.

The plateau of Lassithi itself, the highest such place in Crete (817-850 metres). This is the ideal area for hiking; a particular favourite is from Selakano to the Lassithi plateau and through the Dikte range. Yet there are so many paths to cross, mountains to climb and gorges to ascend or descend, it really is a walker’s paradise.

Tourist facilities can be found all along Lassithi’s three coastlines. Aghios Nikolaos is a lovely place to while away anything from a couple of days, to three weeks and Elounda, on the north-eastern side of the bay of Mirabello, are the most famous, both affording access to the Venetian castle, and later, leper colony, on the islet of Spinalonga. On the east coast, is Zakros, one of the island’s great spots, replete with its own beach, and rooms to rent, a Minoan “palace”, and a wonderful if ominously named gorge (The Valley of the Dead). Further north still is the famous beach of Vai, with palm trees and toll-gate, and the less famous but rather lovely beaches at Itanos. For those who like to get away from it all, Xerokampos south of Zakros is a fabulous place to be almost alone. Way down south, Makriyialos (or Makrigialos) is a popular seaside destination, especially for families.

Moving westward we come to Heraklion prefecture, the most economically developed prefecture of the island and one of the most productive in Greece.

Long sandy beaches unfold across the entire northern area, in close proximity to Heraklion city. The city of Heraklion is the largest and counts approximately 3.000 years of history. Among its many outstanding sights are the Lions Square (a famous Venetian fountain with lions), Venetian Loggia (a magnificent, ornate arcaded Venetian building decorated with blazons and trophies) and the Old Venetian Harbour with Koules Fortress. The Archaeological Museum contains almost all the unique treasures of the Minoan civilization unearthed at Knossos, Phaistos, Malia and other sites. Other sites worth visiting are the Historical Museum, the Museum of Natural History and the Aquarium “CretAquarium”. 5 km south of Heraklion lies Knossos, one of the most important archeological sites in Europe, the legendary center of the Minoan civilization from 1900 to 1400 BC. 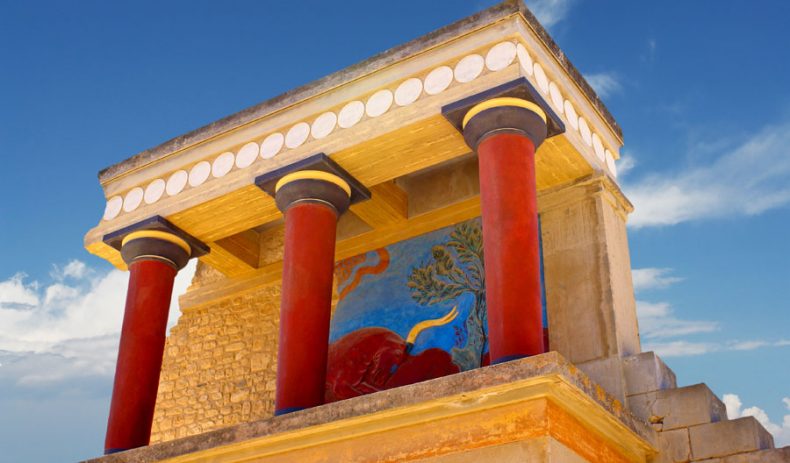 The site contains the remains of the palace of Minos, of dwellings occupied by officials, priests and residents, as well as of cemeteries. 63 km southwest of Heraklion lie the remains of the Phaistos Palace, second in importance in Minoan Crete, inhabited since the Neolithic times. The architectural layout of the palace is identical to the one of Knossos. Moreover, in the vicinity of Malia (34 km east of Heraklion) excavations have brought to light a palace similar to the one of Knossos and Phaistos.

Rethymno prefecture is situated between the two highest mountain ranges of Crete, White Mountains (also referred to as Lefka Ori) and Psiloritis (also known as Ida).
The old town of Rethymno with its narrow streets is one of the best preserved towns of the Venetian era. Lying in the heart of modern Rethymno, it combines the oriental features of the Turkish period with Renaissance-style Venetian architecture. Today the old town of Rethymno is a living museum of monuments of past centuries. Its landmark, the Venetian Fortress “Fortezza” is situated prominently on a rock overlooking the Old Venetian Harbour with the lighthouse.

Chania prefecture is the westernmost part of Crete island and combines exotic sandy beaches and landscapes of great natural beauty with a cosmopolitan atmosphere.

The picturesque Chania town is one of the oldest towns in Crete offering multiple Venetian and Ottoman monuments, such as the Old Venetian Harbour with the Egyptian Lighthouse, Firkas Fortress with the Maritime Museum, the Agora (Main Market) and Kucuk Hasan Mosque. This charming town is considered as an ideal place for romantic walks in the Venetian alleys of the Old Town or the Municipal Garden, sightseeing and nightlife.

The area offers a natural, privileged and well-protected environment featuring a combination of multiple beautiful beaches, breathtaking mountains, and deep gorges. The sandy beaches of Elafonissi, Falassarna, Balos attract thousands of travelers who enjoy the azure, crystal waters of these subtropical beaches.

However, the natural beauty of Chania is not limited to the attractive beaches, since there are also unique opportunities for hiking and discovering breathtaking mountain views and traditional, picturesque villages. The famous, impressive gorges of Samaria and Aradaina are unique biotopes of many endemic species. The outstanding wetland of Kournas Lake, the only natural lake of Crete, is ideal for swimming or boat trips.

It is impossible to explore and truly appreciate Crete in only a few days or even in a few years, and so it is important to choose your itinerary wisely. Hellenic Holidays offers many packages that include destinations in Crete, with handpicked locations to visit and accommodation to stay. If you wish to create your own package, we can help with that too! Visit our packages page for more information.