Hellenic Flavors: Understanding Athens, Santorini and Crete is a Matter of Taste

From the rich food culture of Athens, to the incredible diversity of Crete, to the unparalleled refinement of Santorini, exploring Greece has never tasted so good.

‘Terroir‘ is the term the French coined in an attempt to capture, in a single word, how a specific vineyard – and everything that makes its special – is represented in the wine it produces. The particular make-up of the soil, the way the morning dew lingers in the spring, the long angle of the sunshine hitting the vines in the afternoons, the scent of lavender at dusk. All of these things reach your palate, and if you’re listening to it, there is a world to explore in every sip.

But ‘terroir’ goes far beyond wine. For those open to the experience, a tomato grown on Santorini expresses  a reality that you will find nowhere else on Earth. The diversity of Crete is reflected in a dizzying variety of wines, cheeses, honeys, herbs and other products, many of which are not just specific to the island, but to a particular mountain slope, or gorge.


The land, the elements, the animals and the plants – but most of all the people who harness all of the above, combine to create something that is utterly unique to every place. Each bite is an experience for those who know how to appreciate it.

And Athens? Athens is the ultimate starting point for your exploration of the tastes of Greece. Because the capital is not a single place, but an amalgam of all of Greece. It’s not one city, but a conglomeration of many communities with roots that spread across the country and beyond.

One neighborhood has its roots in the Cyclades. Next to it is one with historic links to the north. Down the road is a district founded by families who came from Crete. Athens is a vast, churning, complex tapestry of traditions, products, influences and demands.

In Piraeus fresh fish is not considered a delicacy but a matter of course. In neighborhoods throughout the city, weekly local farmer’s markets are not a new hipster trend, but a longstanding way for residents to stay connected with the land. Every aspect of culinary Greece is represented in its largest city.

This rich tangle of traditions and quality products is now meeting broader trends. Influenced by the international culinary scene, young, talented chefs are forging new ground, experimenting with new techniques and age-old products, drawing on what their grandmothers taught them and creating new dishes of unprecedented levels of refinement.

Crete – The land that wants of nothing

From the melting pot of Athens it is fitting to move on to Crete. Arguably Greece’s largest island is not an island. It is a microcosm of the country as a whole, a mini continent with everything from snow-capped mountains, to fertile plains, to pristine rivers, to productive fishing grounds. Add to this 7,000 years of recorded history (not to mention its fierce independent streak) and one can begin to see that Crete has a richness few fully appreciate.

Start with the food. And start local. 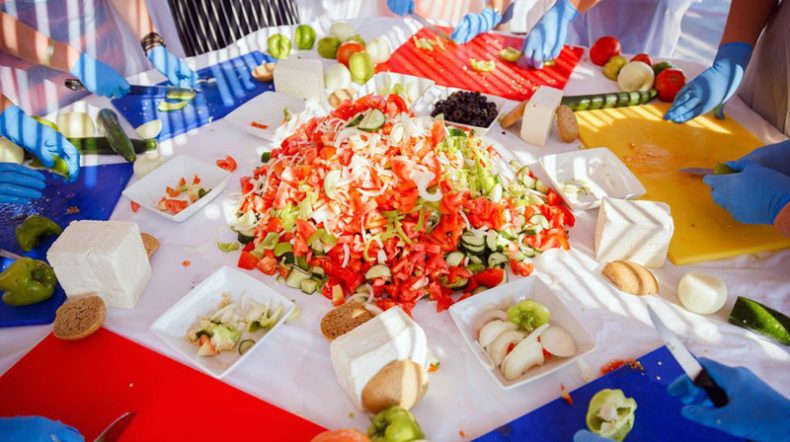 Cooking Class in Crete on the sunny backyard of a farmhouse

Crete has some of the most demanding connoisseurs you will find in the world. But they’re not in the cities of Heraklion, Chania or Rethymno, but out in the villages and countryside. They are the olive growers, cheese makers and wine producers who scoff at the products sold at a premium in London, New York and Paris. They do this not out of a sense of competition, but merely because they know that what they have on their kitchen tables – what they will offer you for free out of a sense of hospitality – is simply better.

They know when the best olives are harvested and the most exceptional oil is made. They know where to get cheese which has come from an an animal a kilometer from the nearest a pesticide. They know which wines are the product of the land, natural rainfall, and vineyards thoroughly adapted to Cretan soils. And that is just the starting point for an incredibly rich culinary tradition that draws on a multitude of cultures and millenia of history.

If Athens and Crete combine a huge wealth of terroirs, cultures and products,  Santorini is the at the other end of the spectrum: a pure distillation of the unique.

The home of the fabled Atlantis needs little introduction. Suffice it to say that the volcano that destroyed civilizations and created the dramatic landscape that draws travelers from all over the world is more than just an historic legend. It is alive and permeates every aspect of the island, including, of course, its unparalleled food and wine.

Here the one-of-a-kind highly mineral soil, low rainfalls, Cycladic sunshine and Aegean winds have conspired to create entirely new varieties unique to this place. The Assyrtico grape, the Santorinian cherry tomato are products of a land that, if it didn’t exist on earth, probably couldn’t be imagined. Combine that with the ultimate in refined luxury travel and the word ‘terroir’ begins to take on entirely new meanings. 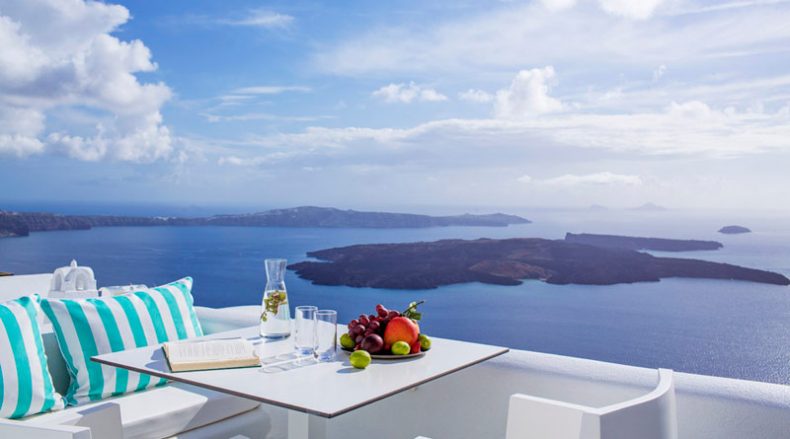 View from Astra Suites in Santorini

On Santorini you will reach new heights of not just taste, but synesthesia: a full activation of the senses where one merges into the next. You can find, buy and drink Assyrtico wine in any number of cities, but is it the same as drinking it at the edge of Santorini’s caldera? Is it the same as sipping it as you watch the sun set from the edge of the volcano that both crafted the grape you are enjoying, the mind-blowing tomato dish you have paired it with, and the jaw dropping view?

There is only one way to find out…

Contact us or select among our packages that travel you to Athens, Crete and Santorini.