Ask anyone to name a Cycladic island destination for a Greek vacation and Naxos is unlikely to be the first name you hear (or even the 5th). Far more likely they will cite the more famous destinations of Mykonos, Santorini or Paros.

And yet one glance at an online map of the Aegean will reveal that Naxos is not just a Cycladic island, but the largest of the group and one of the most accessible. Opt for a satellite view and you will see that it is also one of the most interesting geographically, blessed with tall, forested mountains (including the highest peak in the Cyclades) and many miles of broad, sandy beaches. 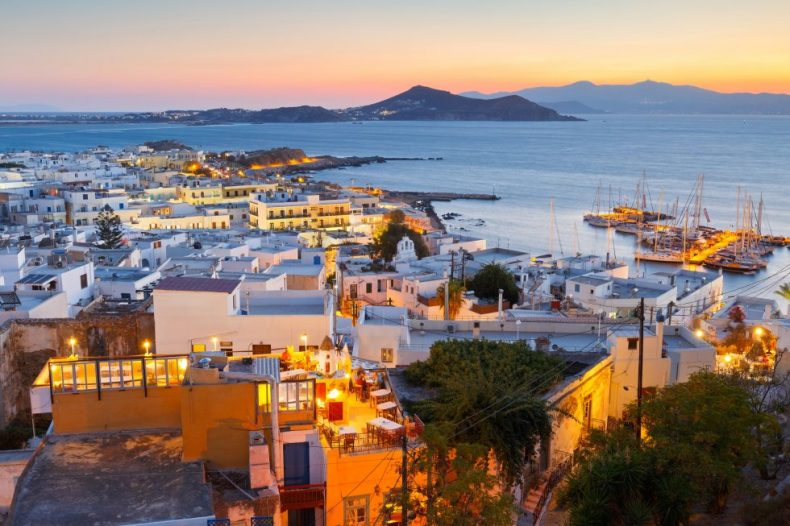 This natural wealth is complemented by a rich history and a slew of archaeological, historical and cultural sites, and some of the best you food you’ll find anywhere in the Mediterranean.

So why, after so many decades of tourism development in the Aegean is Naxos still under the radar for many international tourists? Why did Mykonos develop to become the flagship destination in the Greek islands and not its bigger, more fertile neighbor historically referred to as the “Jewel of the Cyclades?”

The answer, ultimately, is not because of Naxos’ relative poverty compared to other islands, but because of its wealth.

When the first tourists began to arrive in the Cyclades in the 1960s, islands such as Mykonos had few other sources of revenue, with local populations forced to rely mainly on fishing and the very limited agriculture the dry islands and their poor soils could support. These islands therefore took a pioneering role in embracing tourism, quickly making it the central pillar of their economies.

Santorini was in a similar situation, with the local population impoverished following a major earthquake in 1956 that leveled many of the island’s settlements.

Naxos, however, was different. Far more fertile than its neighbors, the island has long thrived off of its agricultural products (and continues to do so), being famous for its excellent cheeses, meat, fruit and potatoes to name a few. Then there are other exports like the exquisite Naxian marble which has been exploited since antiquity and continues to be considered to be some of the finest in the world. In short, the Naxians were doing just fine even before the rise of tourism and vacations in Greece.

Historically this wealth put Naxos at the center of trade in the Aegean, and the island has long been seen as a key prize for various conquerers. Grand castles and centuries-old mansions testify to the sophistication of Naxos’s residents and rulers through the ages.

And so while the island has by no means turned its back on tourism, the industry has seen a much more measured development than elsewhere.

For today’s visitors, this makes the island one of the best-kept secrets in the Aegean. The island that you have never heard of has more than enough to keep you coming back for a summer Greek vacation for many years to come.

Despite its measured tourism development, Naxos still manages to offer more activities than many other islands combined, meaning that you really need look no further to design the ultimate Greek vacation package.

All Greek islands by default offer great swimming and fantastic beaches, but Naxos is even more blessed than most. The entire western coast of the island consists almost entirely of one long beach of golden sand after the other. 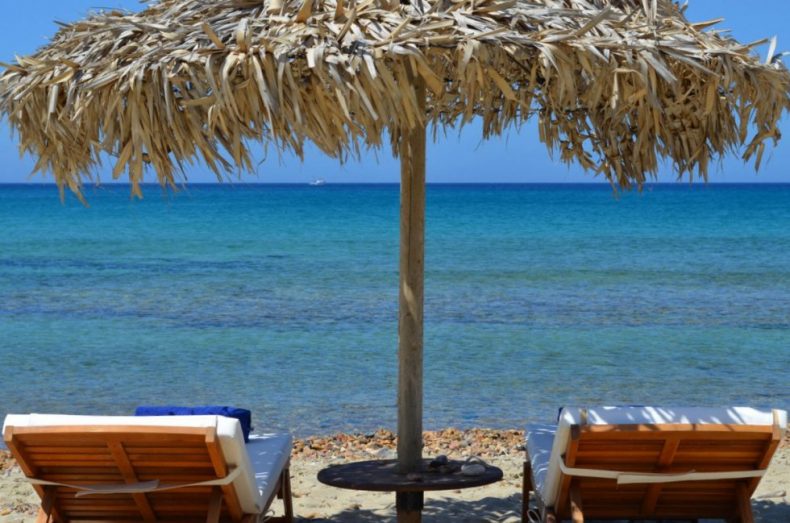 The serenity of a Naxian beach is waiting for you

Do you want pumping cosmopolitan beach bars or pristine empty stretches of sand where you can kick back with barely a soul in sight? Family or single-friendly? All are easily accessible either by car, bike or the island’s well-developed public transport system.

And if its watersports you’re looking for, Naxos is one of Greece’s understated hotspots, with numerous top-class clubs offering kitesurfing, windsurfing and stand up paddleboarding lessons and rental. Scuba diving? Say no more – the island boasts several centers offering tours to numerous fascinating wrecks including a sunken World War II fighter jet.

And that’s not to mention the beachside horse riding or fun waterpark catering to all ages.

As you first pull into the port you will be greeted by the most iconic symbol of Naxos – the ancient doorway (known as the Portara) to an unfinished temple dedicated to Apollo. The perfect frame for a selfie at sunset, it is only the tip of the iceberg of Naxos’ cultural wealth.

Head to the Venetian-era Castle (Kastro) district with its archaeological and Venetian museum. Or take a trip into the island’s interior to discover the wonderful mountain villages such as Apiranthos or Apollonas where a giant statue (kouros) lays where its ancient makers abandoned it when it was damaged in transport. And that’s not to mention the frequent exhibitions, concerts and other cultural events every summer.

Remember what we said about Naxos’ agricultural wealth? You certainly will when you sit down at one of the island’s fantastic restaurants to enjoy some of the finest local products one can find anywhere in the Med.

The most self-sufficient island in the Cyclades, the fruits of Naxos’s fertile soils are diverse and plentiful. At many a local restaurant you will be treated to delicious dishes made with vegetables bursting with freshness that were picked only a few hours earlier (often from the garden just out back). On top of that, the island boasts top-quality meats and local cheeses – and of course fresh fish plucked straight from the Aegean daily. A fisherman preparing for work in Chora, Naxos

Make sure to round out your meal with a glass of kitron – a superb liqueur made from the fruit and leaves of the citron tree that has been produced on the island for generations and which you won’t find anywhere else.

All this variety means that no matter the person, couple or group traveling, all are guaranteed to have a blast. Culture vultures, hikers, bikers, sun-worshippers, adrenaline junkies and more can all find paradise on Naxos – and then swap stories and smiles over a shared, incredible dinner.