Call us
Home / Blog / The Elements of Mykonos

The Elements of Mykonos

As you set about planning the perfect Greece vacation package, there is one island that will always be near the top of any itinerary: Mykonos.

More than any other island, Mykonos embodies the essence of the Greek summer in all of its beautiful contradictions. It is where impeccable infinity pools merge with the wildness of the Aegean. It is where the clean lines of minimalist Cycladic architecture sit comfortable alongside jagged coastlines. It is where the pinnacle of luxury meets life at its simplest and most carefree. 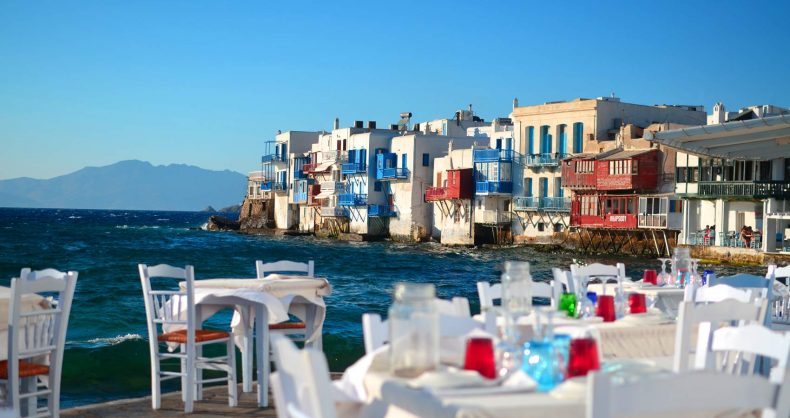 It is where celebrities come to feel down to earth; it is where others go to experience something extraordinary. It is where – with the right guidance from your Greece vacation experts – you will see how simple elements can combine to create something far greater than the sum of their parts.

The fact is that for all its parties, gourmet restaurants and world-class hotels, Mykonos’ magic lies not in its complexity, but in its simplicity. It shows us that the ultimate Greece vacation package, for all the many and varied experiences it will offer, is actually made from only a few beautiful ingredients.

It was the ancient Greeks who first sought to understand the world by breaking it down into its basic elements. So with that philosophy in mind, here are the fundamental elements of Mykonos.

At its most fundamental level, Mykonos is its rocks and soil – these are its bones. It is an island, after all – i.e. the tip of a vast underwater mountain that pokes its head above the waves. 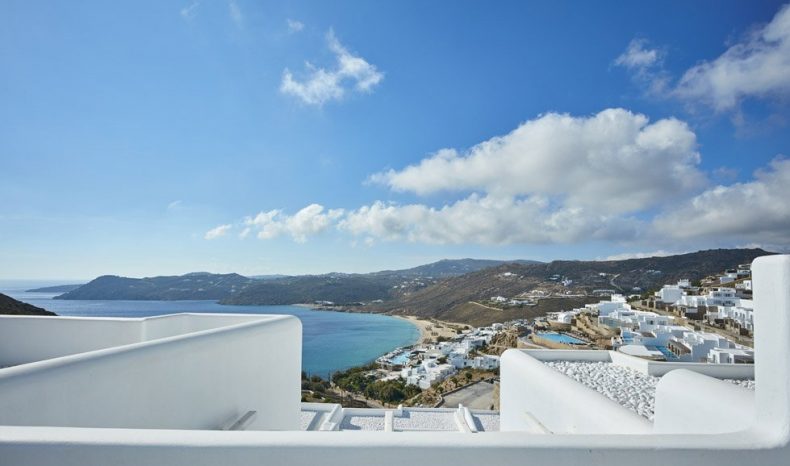 Many say that this land has its own energy, a magnetism that can be felt from the moment you step off the ferry or the plane. Whether that is true or not, what is certain is that on Mykonos even the earth itself becomes the stuff of poetry.

You can see this in the infinite forms its simple minerals can take: the fine sand on its countless beaches; a lace-like coastline with hidden coves and secret beaches; imposing boulders on rolling hillsides; thick walls of whitewashed homes and churches; ancient pottery; terraced landscapes; the pebble you shake out of your shoe after a long walk at sunset.

The other fundamental ingredient of an island is, of course, the sea that surrounds it – this is its lifeblood. In Mykonos’ case this is the deep blue of the Aegean.

Water defines Mykonos as much as the shores that it sculpts. On your vacation to the island you will encounter it in its many forms at every turn: as a wind-whipped sea reflecting all the colors of a glorious sunset, or as a cool, crystal-clear pool that is the perfect temperature for a refreshing swim after a morning run. 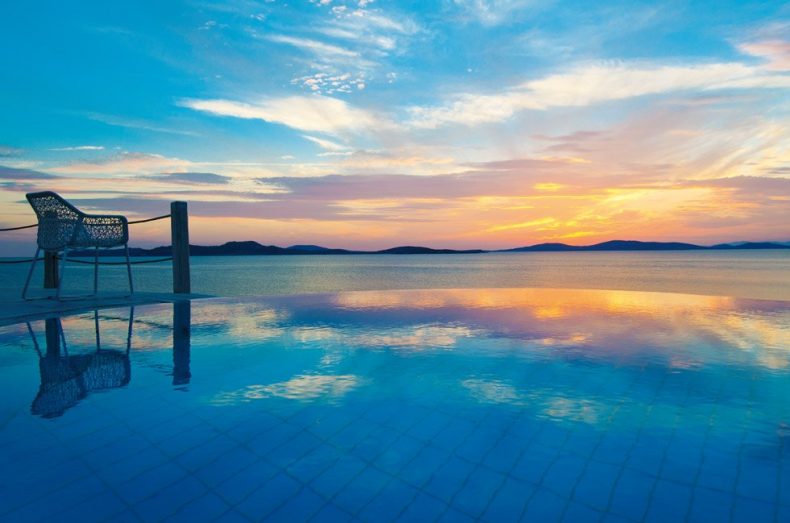 You can enjoy the sea in the form of lazy swims, high-wind kitesurfing and windsurfing or exploring remote coves via sea-kayaks. And at the end of the day, it will even be present on your plate, in the form of delicious, freshly caught seafood, cooked to perfection.

There is a Greek word that many a visitor to Mykonos comes to learn during their stay on the island beyond the basic ‘good morning’, and ‘thank you’. This word is meltemi.

The meltemi is the stiff northerly breeze that blows through the Aegean in the height of summer, keeping the heat from becoming overwhelming and adding to the overall sense of energy and rejuvenation. It is the warm, herb and sea-scented breath of the island. 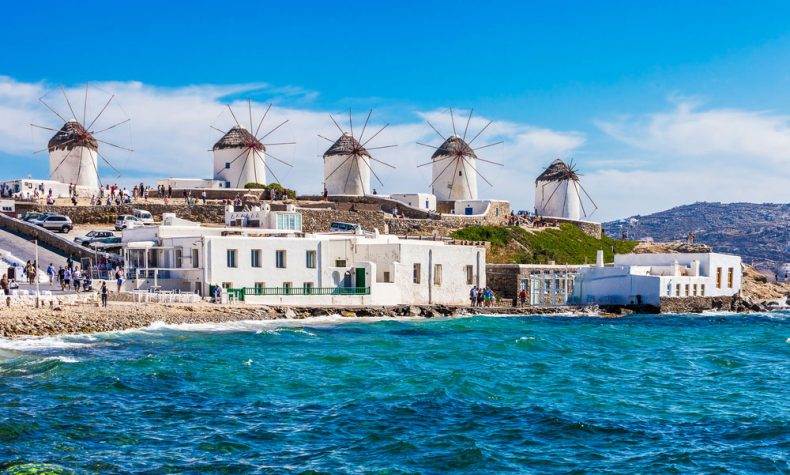 Mykonos’ wind may be invisible, but it has played a key role in shaping the island. It is not by accident, after all, that one of Mykonos’ most famous sights are the windmills on the edge of the main town, (or that you will see many a car with windsurfing boards strapped to the roof).

It is the gift that is most all-pervading on the island, appreciated with every breath you take.

All of the above would be nothing if it wasn’t for the fire that warms Mykonos every day. This, of course, is the legendary Mediterranean sunshine that bakes the landscape, warms the sea, powers the winds and soothes the soul.

Countless words have been written about the unique light of Mykonos – a light that somehow makes every color more vibrant. Stepping out from the dark belly of a ferry boat into Mykonos’ blazing sunshine feels almost like being born again, as if one is stepping out of a black-and-white film into one cast in Technicolor. 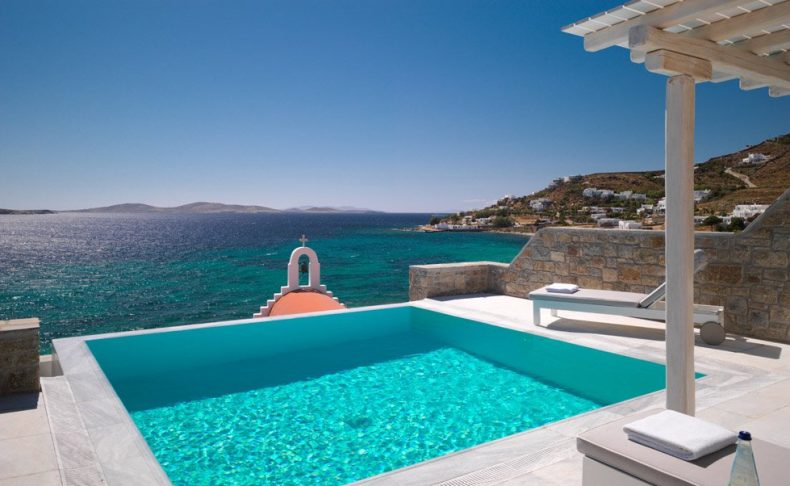 Here the blues are bluer the whites whiter, and the sunset a daily spectacular display. But the fire goes beyond visible light. It is the penetrating heat you can feel warming your skin during the day as you lounge by the pool, or radiating from the sand as you lie on a beach after nightfall, a bonfire burning in the background.

The Fifth Element: You

There is, however, one more element that makes Mykonos what it is: its people.

Be they visitors or locals, it is the people on Mykonos who take all of the elements above and turn them into something more: a heartfelt smile, a cherished memory, a sense of bliss.

Without people, Mykonos is just a hunk of rock lashed by the wind and waves and baked in the sunshine.

But when you arrive it becomes something more: it becomes an experience, and in doing so, it comes alive.