Call us
Home / Blog / The Timeless Magic of Amorgos

The Timeless Magic of Amorgos

If you are considering adding a stay on Amorgos to your Greece vacation package, know that it is not for everyone. But for its admirers (many of whom have an almost religious devotion to the island), that is precisely what makes it so special.

Here you won’t find the sprawling sushi-serving beach bars of Mykonos, or the uber-luxury hotels of Santorini, with a personal infinity pool outside every suite. And you won’t find gaggles of tourists who have just rocked up on the island because it was a convenient destination; being more out of the way than other Cycladic islands, everyone on Amorgos has come to it, specifically, for a reason. (Of course, with Greece vacation experts Hellenic Holidays taking care of the details of your itinerary, getting here for you will be a breeze).

So what is it that attracts its diehard fans? 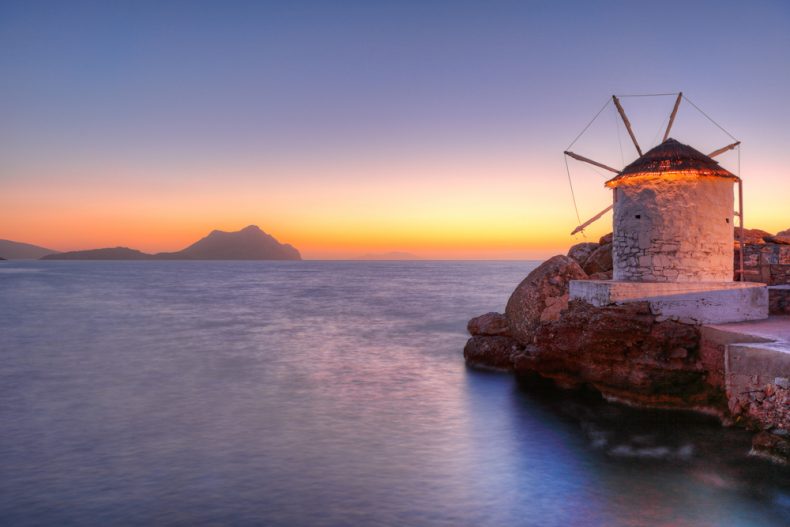 Visiting Amorgos is like taking a step back in time to a simpler age in Greece. It is to experience the Greek islands at their most elemental, to strip away many of the trappings of 21st century tourism and to enjoy classic Cycladic beauty (think steep mountains and traditional, whitewashed villages set against the blue of the Aegean), food that is a simple as it is delicious, and to realize that nothing more is needed.

To get a better sense of the place, all you need to do is watch The Big Blue, Luc Besson’s gorgeous 1988 film about free-divers that was set on the island. A strong contender for the title of the most beautiful film ever set in Greece (or indeed anywhere), Amorgos is its unmistakable star. Even today, 3 decades on, The Big Blue continues to lure people to the island. They rarely leave disappointed – since Besson first became enchanted with Amorgos, little on it has changed.

This timelessness is probably best represented by Amorgos’ most iconic building: the Monastery of Panagia Hozoviotissa, built 1,000 years ago and still functioning today, dedicated to the Virgin Mary, the patron saint of the island. Much like Amorgos itself, the monastery requires some effort to get to – specifically an ascent up a narrow flight of 300 steps – but it more than amply rewards visitors who make the climb.

The monastery itself is a dizzying marvel of Byzantine construction – 8 stories high and only a few meters wide, literally hanging off the side of a cliff. Beneath, the unparalleled blue of the Aegean sparkles in the sunshine – a view that will take your breath away. In its cool interior, the monks will offer you rose-flavored loukoumia (Turkish delight) cold water and psimeni raki – the local firewater spirit flavored with honey and cinnamon.

You will find the same timeless air in the island’s main village – Chora, widely held as one of the most attractive in the Cyclades, complete with whitewashed houses with blue shutters and small, flower-lined courtyards.

You will also find it along the paths that for centuries were the primary way to get around Amorgos. While today one can also explore the island by car along its road network, many of the traditional paths once that were once the islanders’ main thoroughfares have been restored and signposted creating wonderful trekking routes. Thanks to the geography of this roughly seahorse-shaped island which is effectively a long, thin mountain range rising steeply out of the sea, many of these paths boast incredible views, making Amorgos a prime hiking destination. Indeed these paths have been christened the ‘blue paths’ as you can see the sea every step of the way.

From the Mountains to the Sea…

Unsurprisingly, exploring its coastline is equally rewarding. While a few of its more easily accessible beaches have amenities such as sun loungers and tavernas, most of them are exactly as nature created them. Ending up on an isolated stretch of smooth pebbles at the end of a dirt track, you will feel like the first to have discovered it. Indeed it can’t have changed much since the very first settlers arrived on the island millennia ago. Even your bathing suit will feel optional. 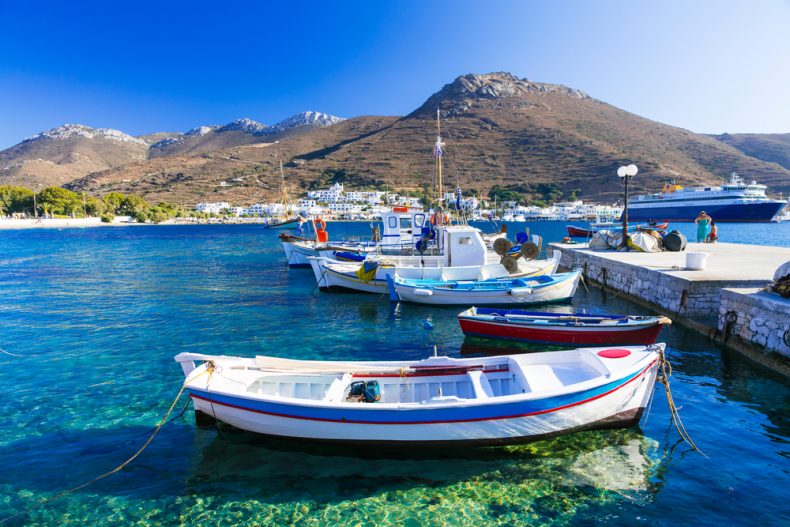 Elsewhere, a solitary, rickety canteen will offer basic refreshments, although the simple, cold can of beer you will sip will seem to be the height of luxury – impossible to improve upon.

…And to the Ineffable

But beyond the sights and experiences of Amorgos, the sense of timelessness seems to hang in the air itself. The natural, easy hospitality of the locals seems to be contagious, and everyone on the island – from the permanent residents to your fellow travelers – will soon start to feel like a large, extended family. The angst of modern life – the frenzied news cycles and clamor of social media seem to lose their power here.

Instead what is important is sharing another glass of raki under a sky filled with innumerable stars while exchanging stories with newfound friends. It’s appreciating the local food that is made with seasonal, local ingredients – not because it’s trendy, but because that’s simply how it has always been done.

It’s slowing down, and adapting to the natural rhythms of the island, safe in the knowledge that even if you don’t have the time to see everything, Amorgos will always be there waiting to welcome you back, together with all those who love it just the way it is.